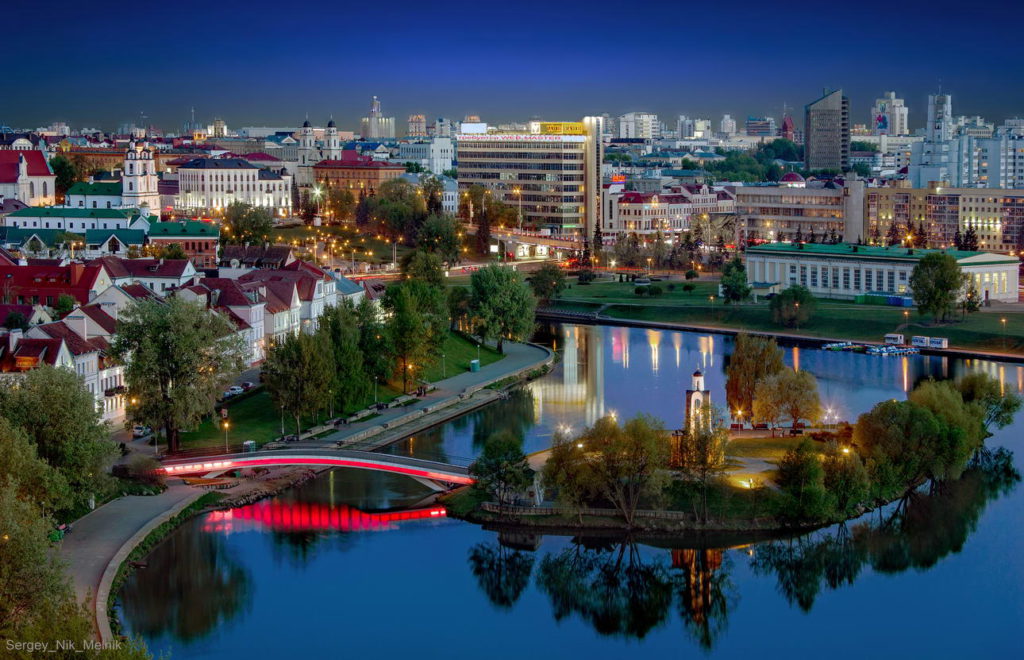 Information about the city is available on official website Belarus, TripAdvisor, Wikitravel and local Tourist page.

Minsk is the capital and largest city of the Republic of Belarus: it is home to about 20 percent of the population of the country, a city in which all government bodies are concentrated. Since 1993 the city has been the official seat of the intergovernmental bodies of the Commonwealth of Independent States (CIS).

Minsk is older than many European cities. It was first mentioned in 1067 in the primary chronicle “Tale of Bygone Years” in connection with a brutal battle on the banks of the Nemiga River between the prince of Polotsk Vseslav Bryachislavovich and princes Yaroslaviches – Izyaslav, Svyatoslav and Vsevolod. “… And there, on the Nemiga, the enemies met on the third day of March and went at each other. The snow was great and there was a cruel slaughter. Many fell in it …” From the chronicles, it is known that at the beginning of the XII century Minsk became the center of the Principality of Minsk headed by Prince Hleb, the son of Prince Vseslav of Polotsk.

Few monuments of the remote past have remained in Minsk. For its long history, the city has repeatedly, almost to the ground, been destroyed by wars and fires. In tribute to the ancestors, there was launched active work on the restoration of historic buildings. The Lower Town and the Upper town with their wonderful temples and secular buildings, Trinity and Rakovsky suburbs with civil buildings of the XVIII-XIX centuries are the golden fund of the architectural heritage of the Belarusian capital. Among the already restored objects there is Minsk City Hall – a symbol of municipal government received in 1499 by the Magdeburg Law.

The construction of the Libava-Romny and Moscow-Brest railway lines in the XIX century gave a powerful impetus to the intensive development of Minsk. In 1800, the population of Minsk was no more than 70 thousand people, and its area was only 3.27 km2 whereas 200 years later – by the beginning of the XXI century – its population had increased by more than 260 times, and the urban area – 94 fold. By the size of the townspeople it is 116th in the world. Today the population of Minsk is 1.8 million people. It occupies an area of 307.90 km2.

Development of Minsk was of universal nature, which provided the city versatility. After the Second World War the international relations of Minsk were determined not only by its geographical location, but also by the formation of a new industrial and cultural potential, new geopolitical realities in the European continent and in the world as whole.

Today Minsk is a modern, dynamic city, the largest transport and logistics center, a cultural and scientific center of the country. One fifth of the employed in the industrial sector of the country are working for the Minsk enterprises producing a quarter of the total industrial output of Belarus. The gross regional product of Minsk is traditionally high. The city boasts of its educated, skilled and hard-working people.

Among the regions of the republic the capital city has the largest share in the volume of retail trade (30.5%) and capital investments (20.2%); the proportion of Minsk is significant in the volume of industrial production (18.9%). The industrial complex is the machine building and metal processing (54.0%), electricity (12.8%), food (15.2%). Minsk provides more than 40% of foreign trade of the Republic of Belarus.

Continuous efforts to diversify markets for products of the Minsk enterprises have increased the number of countries importing Belarusian products to 130. The structure of exports of Minsk products consists mainly of machinery and equipment, vehicles, mineral products, chemical products, food products, ferrous and non-ferrous metals, etc. The main imports are: raw materials, components (57.6%) and consumer goods (25.6%).

It is in Minsk that the highest scientific organization in the country – the National Academy of Sciences – is located. The Academy consists of seven branches combining scientific research institutions in various fields of science such as physics, mathematics and computer science, physics and engineering sciences, biology, agriculture, chemistry and earth sciences, medicine, humanities and arts. The Academy has more than fifteen thousand employees including nearly six and a half thousand researchers among whom there are over five hundred doctors and about two thousand candidates of sciences. The Central Scientific Library of the Academy possesses unique research foundations, the largest and most comprehensive collection of Belarusian foreign literature of natural science subjects. There are more than four million items. Its three museums: The History of the Academy of Sciences, The History of Old Belarusian Culture and The History of Archeology are always ready to meet with numerous visitors. Central Botanical Gardens of the Academy of Sciences have long been a favorite vacation spot of Minsk. In Minsk, the benefit of science works. In Minsk, every fourth Belarusian scientist works for the benefit of science.

The extensive system of education in the capital dates back to the beginning of XVIII century, when in 1713 the Jesuit residence in Minsk was given the status of colleagues. Its lowest level – high school (gymnasia) – consisted of five classes and was a senior high school. Today in Minsk there are 250 schools providing general education, 25 establishments of vocational and technical education, more than 20 institutions of higher education.

Minsk has always been the most widely read city in the country. It is noteworthy that the first public library of the city, founded in 1899, was built on public donations. Today the city has 110 libraries, including the largest in the country – the National Library of Belarus, designed for storage of funds of 14 million units. Since 1994 there has been held an annual International Book Fair gathering the largest publishers of the Eurasian continent.

For centuries Minsk has been a cultural crossroads where the Eastern and Western civilizations, their cultures and religions meet. All this has contributed to the formation of a special socio-cultural and religious situation. People of over 100 nationalities, professing different religions live here in peace and harmony.

Changes taking place in the city’s life also relate to its culture which has absorbed the best traditions of the past – the urban culture of different ages and social classes, ethnic cultures of its population.

Minsk is one of the greenest cities in Europe. Per resident there is 34 m2 of green space, and thanks to the success of environmental policy Minsk is one of the cleanest cities in the country. 19 parks and forest parks, 177 public gardens, 21 boulevards, many flowers and alpine gardens and flower beds adorn the city. Minsk has a unique landscape architecture. Green areas along the river Svisloch and Slepyanskaya water system form two semicircles of water and green diameter running through the whole city.

Natural and cultural public centers – parks and gardens – are favorite places of recreation for the Minsk residents. The oldest park in Minsk – Central Children’s Gorky Park – was founded at the initiative of Zechariah Jakovljevic Korneev – the first civilian governor of Minsk, the senator, the actual state and privy councilor.

Botanical Gardens of the National Academy of Sciences of Belarus are well-known far beyond the borders of our country. It was created in 1932 and covers an area of 80 hectares. They have one of the richest collections of plants in Europe. Botanical gardens are not only a major research center, but also a favorite place of relaxation of Minsk residents and guests of the Belarusian capital. One of the most interesting objects of the capital is Boulders Park in the residential area of Uruchye. It occupies an area of 6.5 hectares and has a collection of 2134boulder-stones brought from all over Belarus. Two-thirds of the park is occupied by the central exhibit – “Map of Belarus”, which is an outline that repeats the shape of the country on the map.

People’s health, improvement of the level and quality of medical care, development of an effective health care system are the most important priorities of health care in Belarus. In Minsk there are 48 hospitals and 425 outpatient departments and clinics. They have managed to save favorable trends in public health care: growth of birth rate and natural increase of the population, reduction of infant mortality and postoperative mortality, including in emergency surgery.

Great attention is paid to the modernization and bringing to the European standards of transport communications. Minsk is one of 86 cities around the world where the most reliable, fast and environmentally friendly mode of transport is the metro.

Minsk can already be called a city of high social standards. In the city, great attention is paid to work with different age and social groups of people, their harmonious spiritual and physical development. Concern for people, improvement of their living and working conditions can be felt everywhere.

As a state capital, Minsk has legalized the right to certain autonomy and independence in the conduct of short-and long-term communal, social, economic and governance policies. This gives the city’s authorities to ensure systematic, active and purposeful management of Minsk.

Caring for people is the epitome of the main ideas of the development of Minsk in the new millennium: the greatest value is its people, and the main purpose of governance is a city with a high quality of life and urban environment. Here, great attention is paid to work with different age and social groups.

Minsk is a city of modest and concise beauty. It is a city of natural charm and warm-heartedness of its citizens – wise, peaceful and tolerant people. Minsk is a city with people who have their ambitions and prospects, who look to the future.